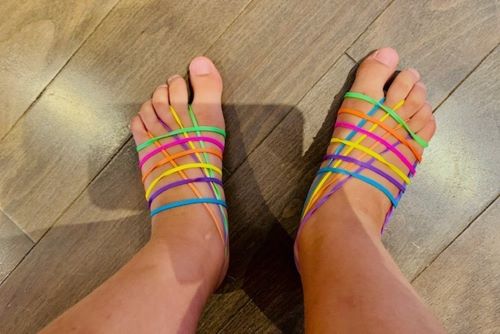 As a kid, I was shy, quiet, and followed the rules. I was attuned to what parents, grandparents and teachers wanted, and tried my best to exhibit behavior that would please them. I colored in the lines, got good grades, and tried not to take up much space, energy or resources.

Before becoming a mom, I imagined myself having a little girl who I would intuitively understand because she would be similar to who I was as a kid. I pictured us reading together, having deep talks, and doing art projects.

Enter my eldest son. Since birth, he was a big kid in more ways than one; he was big for his age in weight and height, and had strong opinions. As a toddler, he had tantrums at times, would make a huge mess when he ate, and even got time outs at daycare because of how he expressed his discontent. By age 4 or 5, he made it known that he didn’t want to color in the lines; he instead wanted to draw in patches of colors, and to design his own mazes. He liked to talk loudly, and his daycare teacher listed his strengths as “verbal skills” and “leadership qualities”. He hyper-focused when he was interested in something (like art) and had a hard time sitting still when it wasn’t a topic that intrinsically interested him.

I must admit that I went through a period of reflecting on my parenting strategies in search of what I could do about this. I wondered why he didn’t want to color for hours like I did at age 5, or sit quietly during meals. Sometimes I felt sad, or frustrated, when he wouldn’t just do things like I did when I was a kid; if only he would, I thought, things would be so much easier.

An example of this that stands out in my memory was of us doing a puzzle one evening; he was moving his legs, humming, and often got distracted. I was trying to explain the concept of starting with the outer edges of a puzzle and working your way in. He wasn’t interested in my strategy, and I remember feeling frustrated – thinking that if he would just listen, he would have an easier time. After repeating a few times, I stopped talking and tried to take a few breaths. I noticed the catastrophic fears come up about his future (how will he listen to rules in school if he doesn’t listen to instructions? How will he focus at school/work when he’s older?). I noticed that my frustration was actually rooted in fear. And something interesting happened when I tried to bring myself back to the present moment. I had the opportunity to pause and observe him. And what I noticed is that he was making progress in the puzzle, but in his own way. He started with parts that immediately stood out to him, and then connected chunks of the puzzle over time. There was a logic to it, it just wasn’t my logic. In fact, he often noticed pieces that went together way before I did. It finally clicked: his mind works differently from mine, he is a different person from me, and that is okay. In fact, it’s good – really good.

Over the last year, my parenting process has shifted a lot. I started sitting back and watching. And I learned a lot about my kid. I’ve continued to take pleasure in observing him do things differently from me. When I call him down for breakfast multiple times and he doesn’t answer, I notice myself feeling frustrated but then decide to observe instead of criticizing. Most of the time, I find him enamored in some creative endeavor. Tonight, he disappeared for about 20 minutes, and came out with his latest invention – colorful elastics in the form of a feet art / sandal combo (see photo). Enter the inspiration for this blog!

I’ve started to feel amazed at how his brain seems to work differently from mine. Whereas I tend to analyze the details and notice problems, he intuitively notices the big picture and the positives. When we walked by a man sleeping on the street one day, and I tried to provide an age-appropriate yet sobering perspective, he looked like he wasn’t listening but then turned to me a few minutes later and pointed out that at least the man had a bike “so he gets to travel around”.

I feel grateful that he feels comfortable being himself and prioritizes that freedom and authenticity over pleasing those around him or making things easier for the rest of us, especially at an age that is supposed to be carefree (and let’s face it, egocentric). I like that he lets his big feelings out at home, and that he feels comfortable taking space. Of course, boundaries are – and will continue to be – important, but these mindful moments of pause and curiosity have the potential to make parenting infinitely more enjoyable.

So, if you, like me, got a child who represents the parts of yourself that you didn’t get to express growing up, see if you can seize this opportunity to observe it, to get curious about it, and to embrace it. See if you can even let it inspire you to channel those parts of yourself as an adult. And don’t forget to acknowledge the important role you have played in fostering their individuality.

The world will surely give our children plenty of messages about how they are supposed to be. At home, let them observe us observing them. Let them delight in us delighting in them. Our acceptance of them contributes to their self-acceptance. Our voices contribute to their inner voice. And we got this.

Siegel, D.J. & Hartzell, M. (2003). Parenting from the inside out: How a deeper self-understanding can help you raise children who thrive. Penguin Publishing Group.

Siegel, D.J. & Payne Bryson, T. (2020). The power of showing up: How parental presence shapes who our kids become and how their brains get wired.