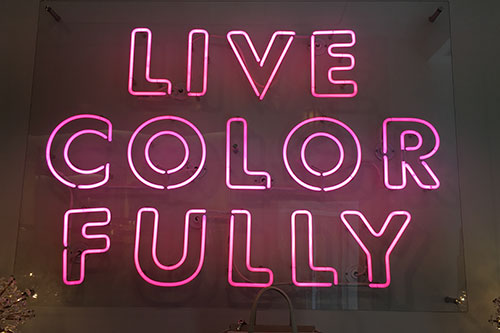 Have you ever had the thought, “I never want to feel this way again.” Maybe you did something that you felt was embarrassing, maybe you experienced something traumatic, maybe you ended a significant relationship and felt broken-hearted. Maybe someone made fun of you and made you feel small. Maybe you had a panic attack and you felt like you were losing control.

Here are some examples:

Beatrice played and loved sports ever since her early days of elementary school. During her first year of high school, her swimming coach commented that if she could just lose her “baby fat”, she’d really have a competitive edge. Although you would not have been able to tell by the look on her face, in that moment, Beatrice felt deep shame. She started dieting as a way to lose weight and feel in control, and in an effort to avoid ever feeling bad about her weight again. Eventually Beatrice developed an eating disorder, and much of her time was spent thinking about food, counting calories, and exercising. She would avoid social events that involved food, as she preferred to have full control of what and when she ate. Also, because she was underweight, she felt more tired and had difficulty concentrating, so school became more difficult and her grades were negatively affected.

Rahim had a panic attack in the middle of a crowd at an outdoor concert. It was the most awful feeling he’d ever had. He felt trapped and like he was going to die. The next time his friends asked if he wanted to go to a concert, he made up an excuse about why he couldn’t go. Similarly, he started to avoid going anywhere where there might be big crowds, like sports games. When he was in a crowded environment, like a house party, he would use alcohol to ease his anxiety. Eventually, he avoided going anywhere far from home in case he had a panic attack, meaning he stopped travelling, which was something he loved to do.

Daniella had been in a long-term relationship for 3 years. She had never opened up to a person and been as vulnerable as she had been in that relationship, which ended a year ago when she found out her then boyfriend had been cheating on her. Daniella understandably never wanted to feel those feelings of hurt and betrayal again. She tried going on dates to meet someone new, but had trouble opening up and connecting with people. Eventually, she decided that dating was pointless and spent most of her free time working.

Beatrice, Rahim, and Daniella all changed their behaviours to avoid feeling emotional pain. In doing so, however, other important aspects of their lives were neglected. Their relationships suffered (or in Daniella’s case, the potential for a romantic relationship), as well as opportunities for growth and positive experiences. Beatrice wasn’t able to fully engage in school, and Rahim was no longer doing something that once brought him joy, travelling.

Additionally, some of the methods they used to avoid were harmful. In Beatrice’s case, she restricted her food intake so much that she became significantly underweight and her health was negatively affected. To ease the worry about having a panic attack, Rahim became dependent on alcohol to feel okay in these situations. For Daniella, it is less clear. Being devoted to work and working hard is something most of us see as a good thing. In some cases though, positive or healthy behaviours or activities, such as sleeping, exercising, or seeing friends, could also be ways of avoiding. We may procrastinate reading that difficult email by reading the news, or working on that paper by cleaning our apartments. We may also avoid our feelings by getting caught up in our thoughts. For example, instead of accepting that a relationship is over and processing the feelings of loss and sadness, we might obsess over what went wrong and what we could’ve done differently.

So what should we do if we think we’re avoiding painful thoughts and emotions at the expense of other important things?

2. Make it a point in your day-to-day life to notice what you might be doing to avoid. Ask yourself if there are behaviours or activities that are hard for you to give up, and why. For example, is it hard to give up a night of seeing friends because you would miss their company, or because being alone with your thoughts causes anxiety? Is it difficult to give up exercise because you would miss the mood-enhancing benefits, or would missing a day of your work-out make you feel like a bad person and cause significant distress?

3. Once you’ve become familiar with the thoughts and emotions you might be avoiding, and the potentially problematic behaviour you might be engaging in to avoid, take some time to identify your values. What are the things that are important to you? Is it growth, relationships, hard work, or fitness, for example? When we are clear on what our values are, we are better able to move toward them even when it’s hard.

No dress rehearsal, this is our life. – Gord Downie –

4. Practice moving towards your values even when you’re experiencing negative thoughts and emotions.To help in this process, break down your “moving toward” behaviour into small, manageable steps, and use strategies to self-soothe and manage difficult emotions, such as mindfulness and deep breathing (or “power” breathing!). For example, if Rahim wanted to start going to places with more crowds because he values new experiences, he could break down this goal into small steps, and maybe start by going to a crowded restaurant, close to home, with a friend. To help him reduce his anxiety in this process, he could use the techniques outlined here, such as the 3-minute breathing space.

5. Be nice to yourself! We are hard-wired to avoid things that make us feel bad. Most of us have those days when we want to hide under the covers instead of facing the world. Instead of judging yourself for avoiding, try approaching these difficulties with curiosity and kindness. This compassionate mindset will be more helpful in moving toward your values when the going gets tough 🙂

Headstuck! What is Experiential Avoidance?

A Shout Out to Simply Noticing.

Those Times When “Being Healthy”…. Isn’t. How To Integrate Self-Care Into Our Exercise Goals

Moving Through Emotional Pain Towards What’s Most Important: One Of Of My Favorite Strategies For Staying Balanced And Getting Out Of My Head

Lisa Linardatos received her PhD in Clinical Psychology at McGill University, in Montreal, Quebec, and is a founding member and psychologist at Connecte Montreal Psychology Group. The team at Connecte loves writing about ways to boost our mental health and bring psychology into our everyday lives. For more helpful tips, check out Connecte’s blogs, podcast, follow @connectepsychology on Instagram or like us on Facebook.