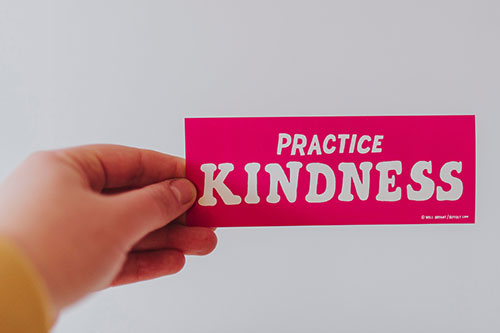 I notice self-criticism the most when it comes from people close to me. A friend or colleague may off-handedly say, “I suck” or “I look terrible today”. When I hear this I have the impression that there’s an invisible bully beside them saying mean things to them, and all I want is to punch that bully in the face, and say “Don’t be mean to my friend!” Yet, I know I am often doing the same thing to myself. But it’s different when it comes to ourselves, right? This criticism is somehow justified when directed at our own self, because we believe we deserve it and it’s the right thing to do. In this blog post, I want to explore why that may not be true, and how to replace our self-critical voice with the voice of a helpful, caring friend, with the hopes that this “friend” will be with you for the rest of your life!

First, a bit about where our self-critic comes from. Maybe we learned it from people around us while we were growing up. Maybe mom often looked in the mirror and said things like, “Boy, do I ever look fat today!”, and without even realizing it we developed similar habits, assuming that this is a normal way to talk to ourselves. Or, maybe a parent, sibling, caregiver, or coach often spoke down to us or criticized us: “Maybe you’d get better grades if you weren’t so lazy.”, “There are only winners or losers.”, “Maybe you’d have an easier time at school if you lost a few pounds.” Although sometimes well intentioned, these messages can imply that there’s something wrong with us, that we’re fundamentally bad, that our worth is conditional on achieving things, etc. Unfortunately, we often end up internalizing these messages, making them our own and assuming them to be true.

It’s also very possible that we learned talk to ourselves in an overly critical way via messages we got from various societal, cultural, or spiritual norms and traditions. In a podcast episode on the Lively Show, Elizabeth Gilbert talks about how in many traditions, suffering is a badge of honour and how “self-hatred is the only socially acceptable way that you’re allowed to think about yourself all the time.” Similarly, Maria Popova of Brainpickings talks about “our culture’s epidemic of self-criticism” in her blog post, The Difficult Art of Self-Compassion. We can all probably think of cultural and religious traditions that have encouraged us to evaluate of our worth and ourselves harshly. Our self-critical voice likely arose from a combination of these sources – family, friends, societal messages, etc. So what can we do about it? Check out my tips below! In this post I will discuss getting to know your self-critical voice and why it exists, and in Part 2 I’ll talk more about how to conquer that critic and develop a healthy alternative.

1. Get to know your self-critical voice.

First, knowledge is power. You may think you know your self-critical voice, but I would bet you probably aren’t fully aware of how often it’s popping up in your mind, and the effect it’s having on your goals and self-worth. Your self-critical voice may come in short phrases (“Stupid!”), long rants, or even mental images. Challenge yourself to spend one day writing down all your self-critical thoughts or images. Take a mindful approach and notice and describe these thoughts without judgment. This will be difficult, as your self-critical voice is very compelling and often seems to be reciting obvious facts. You must therefore be the best detective you can be. You might even put a little reminder/alarm in your phone so it beeps or buzzes every few hours, reminding you to check in and take note of your self-critical voice.

Make sure to write down your self-critical thoughts. Writing them down helps you clarify them, helps you really get in touch with how illogical they are, and holds you accountable to them. SO GET OUT THAT NOTEBOOK!

Once you’ve collected some data, pour yourself a soothing beverage, and perhaps with the support of a good friend (or a psychologist!), do some digging and analyzing. What subjects, themes, and patterns do you notice? Does your self-critical voice have some favourite topics? Maybe it’s body image, your abilities as a parent, how you compare to your friends, or your skills at work or school? Knowing the themes will allow you to know your triggers and most effectively target the areas needed.

2. Get to know why your critic is hanging around.

Chances are, your self-critic is trying to help you and protect you. By understanding its function, you’ll be able to develop another voice or tool that also serves that function, but in a more healthy way.

Some possible motivations for your self-critic, taken directly from, The Self-Esteem Companion: Simple Exercises to Help You Challenge Your Inner Critic and Celebrate Your Personal Strengths (McKay, Fanning, Honeychurch, & Sutker, 2005, p. 34) include:

And one that I added:

3. Identify how it’s getting in the way.

Although as I mentioned above, your self-critic may be trying to help or protect you, I can almost guarantee it’s not actually conducive to the good life you want to live. Here are some ways your self-critical voice may be preventing you from being your best self (1):

By identifying how your self-critical voice is getting in the way for you, how it’s conflicting with your values and who you want to be, you’ll build up strength in your fight against it. It’s one thing for a friend or psychologist to tell you to stop being so hard on yourself, but it’s another thing to really get in touch with how it’s not working for you. Check out this inspiring article for more on this topic: How a Triathlon Helped America Ferrera Defy Her Inner Critic. As described in this article, Emmy award winner America Ferrera wasn’t able to get rid of her self-critical voice until she realized it was getting in the way of something she really wanted to do – running a triathlon.

Also, it’s helpful to remind ourselves that we’re not doing anyone, including ourselves, any favours by being overly self-critical. You may have been taught that it’s the honourable thing to do, but it’s ineffective (more about its ineffectiveness in Part 2 of this blog post!) and you would likely be a nicer person in general if you were nicer to yourself. As clinical psychologist and meditation teacher Tara Brach eloquently stated, “Once we have held ourselves with kindness, we can touch others in a vital and healing way.”

I hope you’ve learned a bit about your self-critical voice by reading this post! Stay tuned for Part 2 of this journey for more tools and techniques on conquering your critic!

Lisa Linardatos received her PhD in Clinical Psychology at McGill University, in Montreal, Quebec, and is a founding member and psychologist at Connecte Montreal Psychology Group. The team at Connecte loves writing about ways to boost our mental health and bring psychology into our everyday lives. For more helpful tips, check out Connecte’s blogs, podcast, follow @connectepsychology on Instagram or like us on Facebook.